Your VCS of Choice

Let’s focus on four established version control systems: Git, Mercurial, Subversion (SVN), and Perforce.
Given a choice, which one would you use for a new project in 2016?

What is your #versioncontrol of choice in 2016?

Last year’s Stack Overflow Developer Survey provided a rating of VCSs by frequency of use. We picked 5 of them for our investigation.

Concurrent Versions System (CVS) is a free, centralized (client-server) revision control system developed in 1990. It was designed to keep track of the file changes. Its active development has effectively stopped in 2008, yet there are few companies still using CVS, mainly because it fulfills their needs and there’s no economically viable reason to migrate their legacy projects.

Perforce is a commercial revision control system, that saw light in 1995. It provides a centralized master server with a file versions repositories. The server can be then accessed via P4 (the command line client) or mirrored to existing Git repositories. Perforce is used by many companies, because of the need for centralized source code control. Yet, a centralized VCS cannot be decentralized later. Many firms start realizing the benefits of having decentralized version control system (DVCS); that, combined with the prohibitive license costs, makes firms switch to the DVCS.

Apache Subversion (often called SVN) is a free, centralized version control system that came to life in 2001. It was designed as a replacement for CVS, with a master server of versioned data (be it code or media files) and individual users operating on their local copies of it. Many companies still use SVN due to the existing infrastructure built around it.

Git is a free, distributed version control system. It was created in 2005 and since then has been widely adopted by big and small companies around the globe. Among companies using Git are Google, Microsoft, and Twitter.

Mercurial is a free, decentralized source code management system. It was developed in 2005 to be a highly performant and scalable system, powerful yet simple. Since then, Mercurial has been adopted by organizations such as Mozilla, Facebook, NGINX, and W3C.

Turning to Google Trends data is a one way to determine a VCS popularity. Google Trends tool allows to compare how many times a particular version control system was searched (i.e., its popularity in Google) relative to the total search volume in the world.

Considering the graph above, it becomes clear that Git is the most popular version control system in 2016. That’s not by chance, as its search interest rank has been constantly heading upward since 2004. Git-related searches overtook the searches for Mercurial and CVS in 2007 and surpassed Apache Subversion (SVN) in 2012. SVN has been declining since 2009 with that downtrend sustained in 2016. Perforce seems to sustain a loyal but small share of interest.

Search interest for the term is shown as a ranked scale (1 to 100), with the rankings being normalized so that they are comparable to each other. The most recent data available is for June 2016:

In 2016 there were 2.4 times more searches around Git than for all the other systems combined (94 vs 39 respectively):

Were there only 5 version control systems on the planet in 2016, that is how their shares of search interest would stack up across the whole VCS market:

To sum this up:

Git is the most popular version control system in 2016. It enjoys its hefty 70% of all the search interest among these five VCSs.
Mercurial, with its 13.5% share, is still a tool of choice for companies like Facebook, Mozilla, Nginx, and NetBeans.
Subversion (SVN) has 13.5% share as well, still used by some of the largest companies all over the world, such as Backblaze, FreeBSD, Mono, and SourceForge.
Perforce has gained only 1.5% interest in 2016. It has been widely used by Google, until they built their own VCS called Piper in 2015.
Concurrent Version Systems has the smallest share of (0.8%) in 2016, even though many IDEs have built-in CVS support: Eclipse, Emacs, NetBeans, PyCharm, and others.

Indeed, Git has the greatest number of questions in 2016 on Stack Overflow as well. More than 20,000. were devoted to Git which is around 87% of all the questions asked about the 5 version control systems in place.

Another VCS which people frequently ask about is Subversion. It has 2,214 questions (9%) among the VCSs in study. The rest of the questions about Mercurial, Perforce, and CVS make 1,004 (4% of the total). Since 2010, developers have started to have more discussions about Git than about Subversion or any other VCS system we researched. Mercurial, CVS, and Perforce seem to always take a stand on the sidelines.

This is also reflected by the overall distribution of the VCS-related questions:

Git has the greatest total number of discussions; more than 70,000 questions were asked. It is followed by SVN, having more than 20,000 questions. Mercurial, CVS, and Perforce wrap up the list having not more than 10,000 of queries altogether.

The data from Stack Overflow confirms once more; Git is the most popular version control system, followed by SVN. Perforce, CVS, and Mercurial keep their niches.

To verify the popularity trends among the version control systems, we researched the data in Google Trends and Stack Overflow. Let’s now turn to another source: Eclipse Community Survey.

For five years (2009-2014), Eclipse Community tried to reveal the usage of various version control systems among its developers. In their annual community surveys, they asked the respondents about the primary source code management system used the most in their projects.

From these surveys, the upward trend of Git and the downward trend of Subversion (SVN) can be observed very clearly. In 2014 where Git finally surpassed SVN and became the VCS of choice among developers of Eclipse Community. 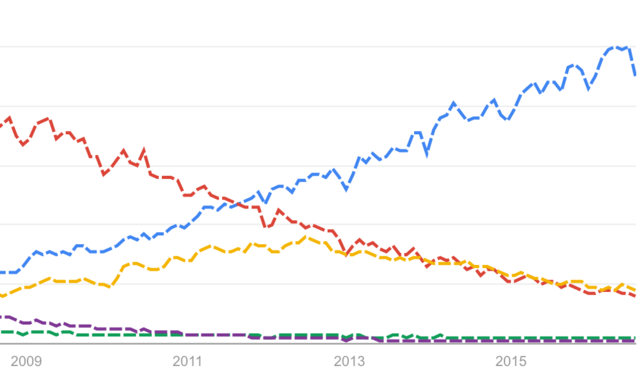 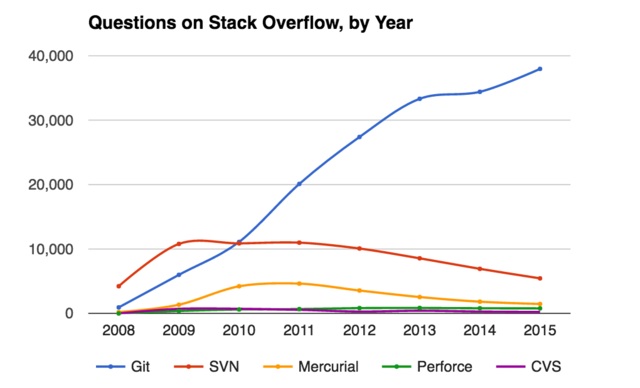 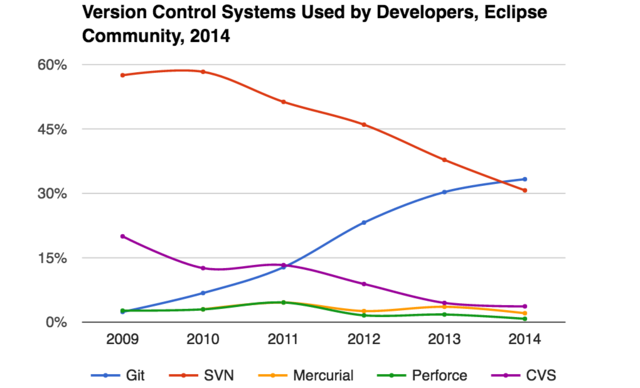 It is worth mentioning that Git was the system of highest interest in 2010-2012, yet its wide adoption by developers happened a few years later. Git became the most-used source code management system by Eclipse Community respondents in 2014. Google Trends and Stack Overflow data reflect the interest dynamics for a technology. According to the data, Git overtook Subversion (SVN) in 2010 (Stack Overflow) or 2012 (Google Trends). While the interest may have peaked during these years, the actual shift in adoption of the technology between Git and SVN (when people started widely using it) has happened only in 2014 (Eclipse Community Survey).

That may be explained by the fact that there is always a lag between the availability of a technology or system and its adoption.

RhodeCode is an enterprise source code management platform. Whether you use Git, Mercurial or Subversion, you will have a unified repository management within the organization. No forced migration from one VCS to another, but common authentication, unified code review tools, APIs, integrations, and permission controls, simultaneous across all your repositories. 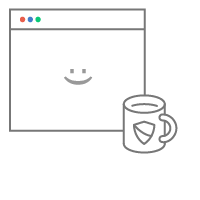 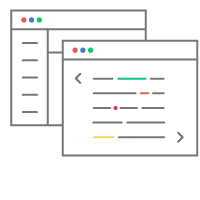 Large and growing software development teams all over the world rely on RhodeCode for unified management of their secure, behind-the-firewall repositories, where conventional repository management tools are simply not enough. Let’s talk!

Reach the core team on the Community Portal or join us on Slack!
For sales inquiries and quotes, please contact the sales team at sales@rhodecode.com
Source code is available on the platform itself: rhodecode.com/open-source (contributors are welcome).